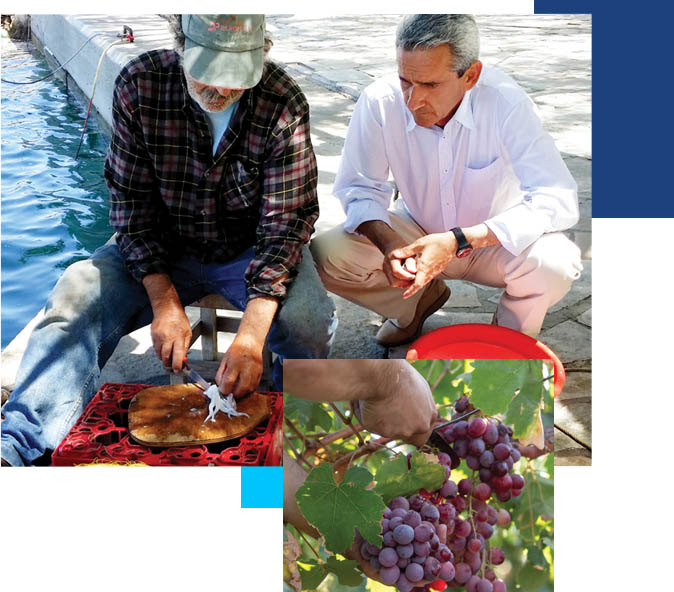 From the time of Archestratus to this day, the Southern Aegean Islands’ gastronomy makes up some of the most ancient cuisines of the world that are famously documented and has never lost its unique, authentic flavour. From brilliant descriptions in Homer to the lavish symposia of classical Antiquity and the Deipnosofistae, from Hippocrates’ ‘On Diet’ and Plato’s ‘Symposium’ to Andrew Dalby’s “Siren Feasts”, all register an exciting historic gastronomic narrative. They are part of an unperturbed continuum from Prehistoric times to present, running through Roman times, Byzantium, the Francs, the Venetian Era and the Ottoman rule. The culinary traditions of the South Aegean are an integral feature of traditional Hellenic hospitality.

For at least three thousand years, this region’s cuisine has had its own primary ingredients that create simple recipes that have come to typify the best of Greek national cuisine and generated many of the features of the modern-day European diet. For the South Aegean, gastronomy is not just about food, it is about the very essence of wellbeing, a true social and cultural event: it is a philosophy and a way of life. Fifty inhabited islands and hundreds of more desert islets, come to make the South Aegean unique, each island boasting of its own gastronomic identity and all of them composing the culinary culture of the Archipelago.

Quality ingredients are at the heart of our islands’ gastronomy. These ingredients are shaped by a varied landscape, our microclimate, the sun, the air and the salt of the sea breeze. Through the endless, golden olive groves, the perennial, historic vineyards, the gastronomic and winemaking tradition of the Archipelago is an invaluable gem in the timeless mosaic of the Hellenic Civilization, and of the culture of Europe as a whole.

By submitting its candidacy for the title of European Region of Gastronomy 2019, the Region of the South Aegean intends to reach our long-term goals as well as highlight the history of our gastronomy in what could be an immense symposium, a context within which to share its millennial secrets with our visitors to this exciting tour of flavours meant to stimulate all of the five senses.